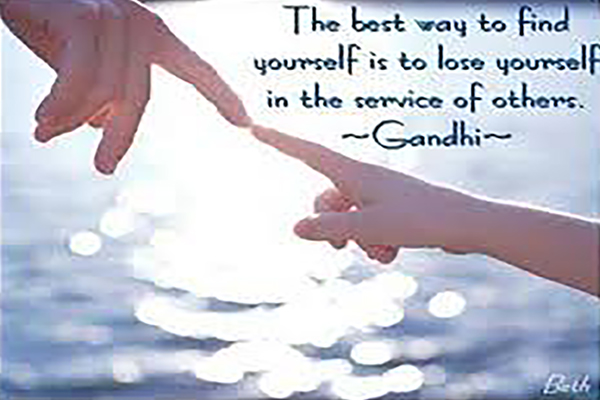 Self love, is service to the self. It is not how much we can love ourselves and pander to the egos wants.  It is not putting oneself before another, or other games that the ego plays, like saying I’m so important, I must come first, my needs and wants are greater than another’s’.  Self love is at its essence service rendered to others.  It is self sacrificing in that it is an acknowledgment that the self appears in all others and not just within me.

It can be difficult to grasp the distinctions between being selfish and being selfless. Many seem confused as they go through life without care or responsibility for thoughts or actions taken.  Service is the highest path.  Service and surrender go hand in hand.  Being in the moment and in service perhaps is the most beautiful of human expressions.  Far to many are out of center, out of now, in time, in a fake delusional expression of self, thinking about the past or future, talking about their so called surrender rather than doing it, being it, living it.

The ego will tell you what you want to hear.  The self, no whisper even, calls you with an irresistible tugging.  A pulling on the heart that leads you home.  It is the real you.  It is the knowledge and acknowledgment of self that calls.  You only need to surrender to its call to know it again, for you never left but fell into duality, polarity, ego.  The construct you created to protect yourself because you thought you need protection from others and that you needed to navigate in time.  When you drop – other, you have remaining, – only you.

Polarity, comparing, opposites, difference, illusion.  Balance in all things means a balance in the polarity of being which most fall into.  The ego goes, you are like that, or it says, you said that, or that person is acting such a way and sometimes it is said very softly, very subtly.  How do you trick yourself into judgment, into justifying polarity?

Service is surrender to the highest good in the moment of now as one cares deeper for another, putting them first, before oneself, before the ego.  Knowing as we are caring for our self in a selfless manner surrendering to what is right in front of us, right now, we are receiving.

How can you give service to your self, now, right now?

Just do it and remain as you truly are.

May all beings be blessed

This site uses Akismet to reduce spam. Learn how your comment data is processed.